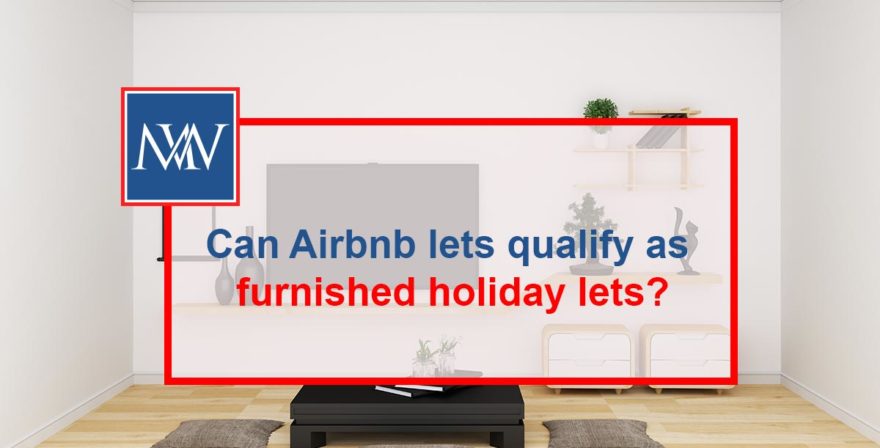 Many Airbnb lets are used as holiday accommodation. From a tax perspective, furnished holiday lettings enjoy some tax advantages over other lets. So, is it possible for an Airbnb let to benefit from these advantages and what conditions must be met?

Simply letting a property as furnished holiday accommodation is not in itself sufficient to qualify for the furnished holiday letting (FHL) treatment. As with other lets, Airbnb lets must meet the conditions set out in the legislation.

The first point to note is that the furnished holiday letting (FHL) treatment is only available to properties which are in the UK or the EEA and which are let furnished.

There are three occupancy conditions which must be met for a property to be treated as a furnished holiday letting (FHL).

Condition 1 – the pattern of an occupancy condition

The pattern of occupancy condition is met if the total of all lettings in the tax year exceeding 31 days is 155 days or less. The nature of holiday letting is multiple short lets rather than longer lets and this condition seeks to recognise this.

Longer-term lets of more than 31 days are also ignored (unless a let which was supposed to be less than 31 days is extended due to unforeseen circumstances, such as a delayed flight or the holidaymaker becoming ill).

If a person has more than one property let as holiday accommodation (whether via Airbnb or similar or otherwise), an averaging election can be made where the letting condition of 105 days is not met. As long as the average let across all properties is at least 105 days in the tax year, the condition is treated as met. Thus, if a person has three-holiday properties which were let commercially for periods of 31 days or less for at least 315 (3 x 105) days in the year, the average let would pass the test.

Qualifying as a furnished holiday letting (FHL) offers a number of advantages. It opens the door to various capital gains tax reliefs for traders, including entrepreneurs’ relief. The landlord is also eligible to claim plant and machinery capital allowances if the cash basis is not used. Profits also count as earnings for pension purposes.