IT consultant held contract for services 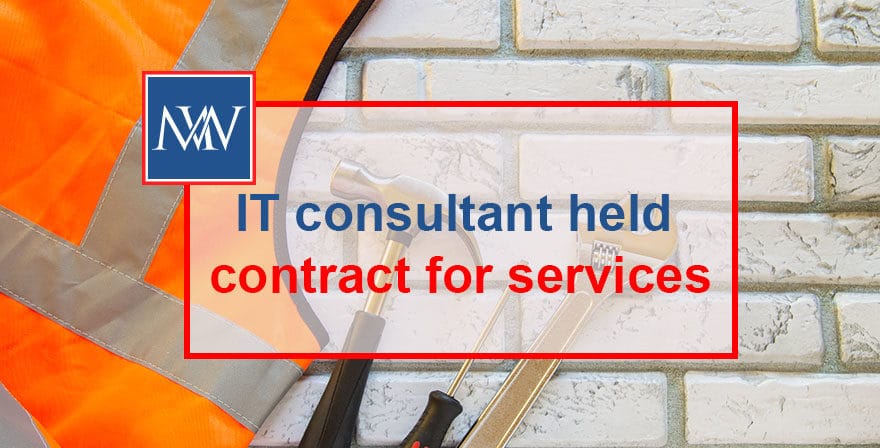 IT consultant held contract for services

HMRC’s application of the IR35 rules remains ambiguous after an IT contractor successfully appealed to the First-Tier Tribunal (FTT) against a tax charge arising under the intermediaries’ legislation.

In RALC Consulting Ltd v HMRC [2019] TC 07474, the FTT allowed an appeal against HMRC’s determination that IR35 applied because the ‘hypothetical contract’ between various parties making up the service provider chain lacked the requisite mutuality of obligation.

In this case, RALC Consulting Ltd (RALC) (the appellant), was the personal service company (PSC) of IT consultant Richard Alcock, who was the company’s sole director and shareholder.

During the tax years in question, RALC Consulting Ltd contracted with Mr Alcock’s former employer Accenture UK Ltd (Accenture) and with the Department for Work and Pensions (DWP), a client whose projects Mr Alcock had previously worked on, to provide Mr Alcock’s services working on a large IT project.

The contractual arrangements entered into by the appellant with Accenture and DWP were four-party chains, namely Mr Alcock, RALC, an agency, and the end clients. HMRC contended that as Mr Alcock had carried on working for his previous employer an ‘expectation of continued work existed’. The FTT, however, did not agree with HMRC’s submission that the long history of Mr Alcock’s previous engagement uand operation of the contract in practice led to an expectation that Mr Alcock would be provided with work every day during the course of an assignment, such that it amounted to a legal obligation.

The FTT looked not only at the terms of the contract but also at their application in practice and concluded that it was not satisfied on balance that sufficient ‘mutuality of obligations’ existed between Mr Alcock and the end clients in the hypothetical contracts to establish an employment relationship. Since there was no minimum obligation to provide work and no ability to charge for just making himself available, the FTT found that the key elements of mutuality, in the work, or wage bargain sense, were missing, and therefore Mr Alcock could not be considered an employee.

The Tribunal was satisfied that Mr Alcock had substantial control over his contracts and control over how he performed his services. The FTT also accepted that Mr Alcock’s engagements permitted him to provide a substitute but the end clients had the right to refuse to authorise any substitute proposed if they were deemed unsuitable. Therefore, while it was a genuine right of substitution, it was a fettered right subject to the approval of his clients.

The FTT concluded that the intermediaries legislation did not apply as the hypothetical contracts with the end clients indicated ‘contract for services’, meaning Mr Alcock would have been self-employed. HMRC’s determinations, decisions and notices were cancelled. The appellant was not liable to pay income tax and NICs assessed by HMRC. The appeal was allowed in full.

The outcome of the decision, in this case, rested largely on the FTT’s interpretation of mutuality of obligation. HMRC’s interpretation that where one party agrees to work for the other in return for payment satisfies mutuality of obligation between the two parties, was dismissed by the Tribunal. The appellant’s circumstances were such that they were not caught by the IR35 legislation, and in turn, this outcome now throws further uncertainty into the IR35 framework.